The only time of day where it’s cool enough to do anything is 6am, so, in Hanoi, people gather around the small lake in the old town to work out. While the wide boulevard circling the lake serves as a 1/4-mile track for runners, the area is also spotted with congregations of old women practicing tai-chi with paper fans. However, in stark contrast to traditional tai-chi and far outnumbering the joggers are hundreds of middle-aged women doing some kind of Zumba in the adjacent square. They stand in grids doing fast-paced aerobics to techno, their arms outstretched and vigorously oscillating like a penguin trying different techniques to fly.

By mid-morning the traffic, which is 99% motorbikes, is in full swing and all the sidewalk cafes are packed with people drinking iced coffee or iced tea and sitting on toddler-sized wooden folding chairs that face out to the street. The traffic is memorizing. It’s a high-speed motorized version of people watching.

On one motorbike, a mother appears to be taking her two kids to school. The kids, in school uniforms, sit in front of their mother. The older child gets the front seat, as is his privilege, while the younger child remains squished between their sibling and mother. A large belt straps the three of them together (but not to the bike) keeping them safe or, at least, unifying their fate.

On another motorbike, a man is driving his sister or girlfriend to her office job. On the back of the bike, she is riding side-saddle, legs crossed in a knee-length skirt while she applies lipstick or checks her phone. She is wearing a helmet with a specialized hole on the back allowing her pony tail to protrude unobstructed.

For an Asian country, I was a surprised that people seem to leave work promptly at 5pm. Maybe that’s the benefit of communism? Either way, the sea of motorbikes rises again to high tide at quitting time as people leave work or pick up their children from school.

In the evenings, the sidewalks are packed with people enjoying glasses of beer. This time the furniture is toddler-size plastic chairs. As the beer isn’t refrigerated, a large pellet of ice is withdrawn from a camping cooler with tongs and added to the glass. Men cross the street to the grassy meridian to relieve themselves and then return to keep filling themselves up.

Back at the lake, the night air is cool, and people are exercising again. The evening is more mellow with ballroom or line dancing taking the place of Zumba. 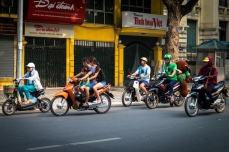 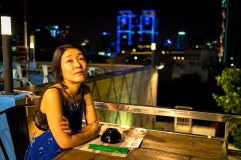 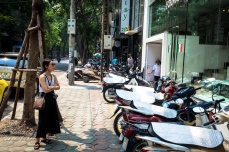 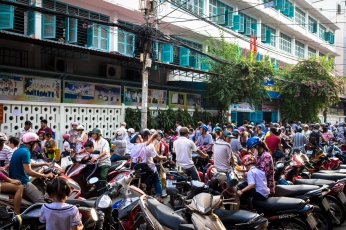 Picking up kids from school 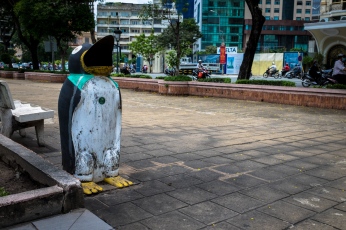 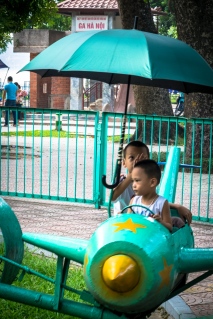 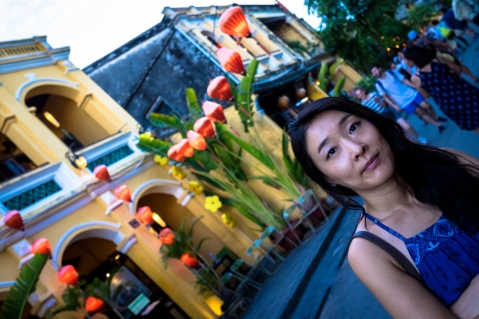 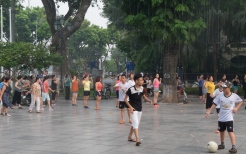 6AM and everyone is working out 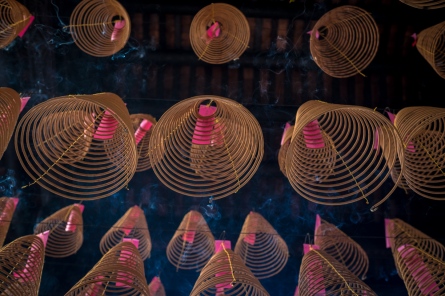 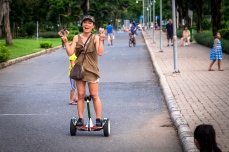